Below some of the images that I was able to capture. I hope you won't find my explanations too excessive.

1) This is one of the most famous sculpture of the Hermitage, so called Venus of Tavrida. II century AD Roman (?) copy of the Greek original of III - II c. BC. Marble, 162 cm hight.

* Tavrida is a Greek name of the modern Crimea Peninsula. The palace got it's name from count Potemkin (the lover and possible husband of Catherine the Great of Russia), he was the governor of Tavrida and build the palace to pretend that he lived there (though he spent his time in St. Petersburg in Winter Palace (modern Hermitage) with Catherine). 2) One of my all time favorites in the vase department. White-ground lekythos (The Pan painter), Attica, c. 490 BC, clay, red-figure painting, 38 cm. Each time I am in Hermitage in Ancient Greece section, I go directly to this lekythos. I can't quite explain it but it's very beautiful.
I decided to borrow the description from official website since it provides acurate and I hope interesting information.  Lekythos is a vase for oil and ointments. This example combines the red-figure technique - in which the image or ornament is reserved in unpainted clay against a background painted with black lacquer - with painting on a white ground covering the central part of the body. White-ground lekythi were usually used in burial rituals.

Artemis, goddess of the hunt, holds in one hand a flat bowl or phialeand with the other touches the beak of a swan. The face and naked parts of the goddess's body and the figure of the swan are in low relief, formed through layers of application of the white ground. The remaining drawing is composed of lacquer and relief lines, with details drawn in diluted lacquer to create a painterly effect. The grace of the goddess's slender silhouette is emphasized by the elegant gesture of the hands. The face is enlivened by an "archaic" smile, while the folds of drapery are arranged according to an old-fashioned system known as the "swallow tail".
A taste for archaic forms in vase painting, the interest in rare subjects and the creation of poetic images were all features of the work of an artist known - after a depiction of Pan on a vase in Boston - as the Pan Painter. The Hermitage lekythos is one of the best works by this outstanding vase-painter of the first quarter of the 5th century BC. 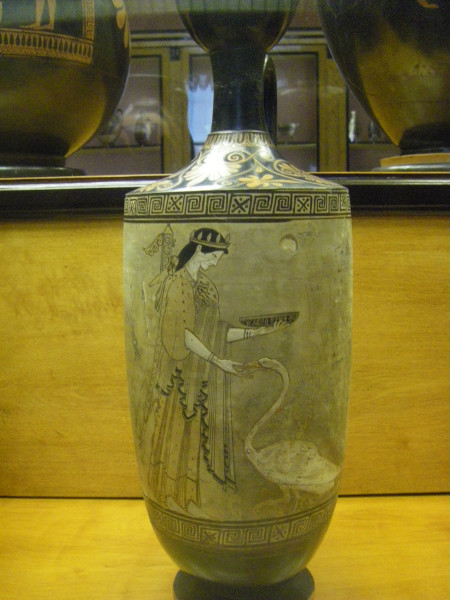